Over the last few months, there has been much frantic scurrying to find potential treatments to use against the Novel -V.  One such potential treatment that has garnered quite a bit of interest is CBD (cannabidiol), in this article we look at why this cannabinoid may be the ace in the hole.

Disclaimer! 1111CBD LLC does not advocate the use of any of its products for the treatment of any infection or terminal illness, without the advice of your registered medical practitioner. The FDA has not approved or tested CBD for coronavirus or Covid19.

The reason that CBD is being investigated is evident when we understand how this virus spreads, gains entry into our cells and how some folks recover, whilst others head into critical territory at increasing speed.  A clear understanding of how the immune system works is fundamental as the immune system’s power to save your life is only equalled by its power to abruptly end it.

After the 1918 Spanish flu, which is known as the mother of all pandemics, due to it infecting a third of the world’s population and claiming as many as 50 million lives, research into the culprit mechanism responsible for mortality, revealed that while trying to destroy flu-infected cells, the immune system also destroys many perfectly healthy cells all over your body. The virus’s destructive impact on the cell triggers the immune system to overreact, as the virus spreads through the cells triggering apoptosis (cell death), the greater the immune response.  This is how a virus can overcome its host; it uses the body’s own defense against itself. As the viral load increases the immune system responds with a reaction so destructive it can be fatal, the stronger the immune system, the greater the ferocity of the storm.

The Novel virus gains entry into our cells through the ACE II receptor, these receptors are located in the nose, mouth, throat, lungs, arteries, stomach, small intestine, colon, beneath the outer skin layer, lymph nodes, thymus, bone marrow, spleen, liver, kidney, testes and in the brain. These are all integral components of the immune system. Once a viron particle gains entry into the cell via the ACEII receptor, it hijacks the cell’s own machinery and uses it to make copies of itself in a process known as viral replication, this eventually leads to cell destruction (apoptosis). These copies of the viron particles are then released into the body to find and invade more healthy cells, resulting in a cascade of cell destruction, causing the immune system to panic and a Cytokine storm ensues.

Cytokines are molecules used by immune cells to pass messages between each other; these molecules direct the immune system to the site of infection by identifying specific viral cells it should be attacking. Cytokine storms can cause serious damage in the body particularly in the lungs, as a result of the cellular destruction not only from the virus, but even more so from the immune cells overacting.  T Cells considered the Generals of the immune cells, Macrophages which literally eat the viruses and should be excreted and the NK cells or natural killer cells, all rush into battle.

The fundamental approach of the immune system is to detect infected cells and initiate apoptosis, notably this process is partly under the control of the endocannabinoid system (ECS). The ECS is tasked with promoting balance through a process of Immunomodulation, characterized by its ability to influence control over the following:

As the virus infects more and more cells and the viral load increases exponentially, soon making its way into the lungs where it becomes particularly dangerous. Once the virus has made its way into the lungs, gaining entry into the lung cells through the ACE II receptors it causes apoptosis and triggers massive damage due to the resulting immune response.  This critically damages the cell tissue and causes fibrosis thereby permanently inhibiting the person’s ability to absorb and metabolise oxygen. This is why ventilation is required as it is used to open up the airways. Part of the immune systems innate response to a viral attack involves the agents characterized above and arrives in the form of mucus and inflammation, packed full of these immune cells. When however the lungs are concerned, considering the impact of the fibrosis, the additional formation of mucus can inflate the severity of the condition even further and the condition of acute respiratory distress syndrome occurs.

The ACE II receptor is responsible for the conversion of angiotensin proteins, hence their name Angiotensin converting enzyme (ACE). ACE2 specifically helps lower blood pressure by catalysing the hydrolysis of angiotensin II (a vasoconstrictor peptide) into angiotensin (1–7) which is a vasodilator.

It is important to note that ACEII receptors counter the activity of the related (ACEI) by reducing the amount of angiotensin-II, by hydrolysing it into Angiotensin (1-7).  Therefore if our ACEII receptors are compromised by the virus, it leaves little option for converting angiotensin, only one pathway is available and as we have discussed it leads to the development of inflammation and ultimately fibrosis. Here is a diagram depicting the pathway and consequence of each, courtesy of Dr. Mike Hansen who specialises in pulmonary medicine, critical care medicine and internal medicine. 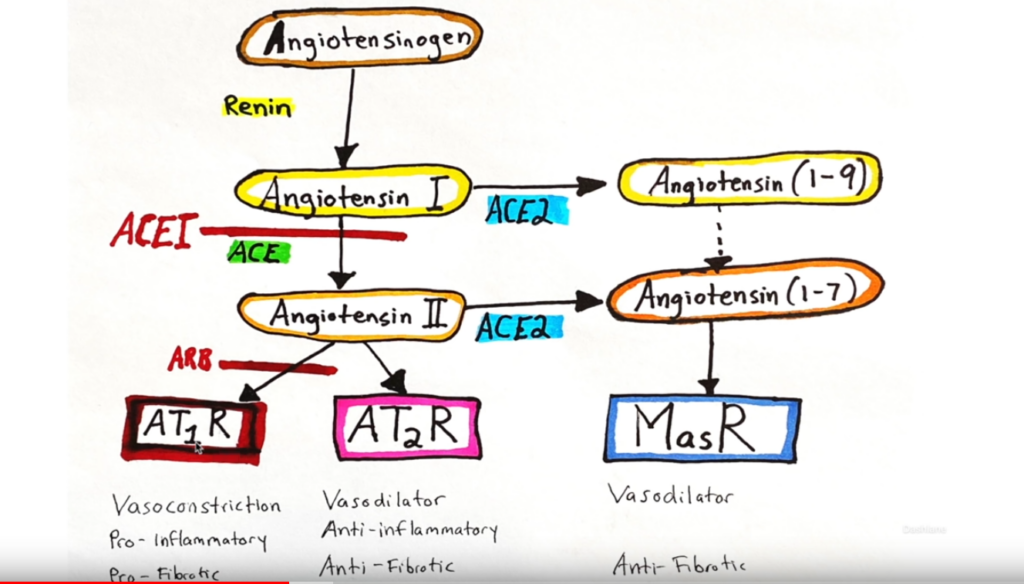 CBD on its own, without THC is bidirectional, meaning that its action on the CB1 receptor changes dependant on the need of the system. THC pushes in one direction on the CB1 receptor and is immunosuppressive regardless of the system’s needs. This amazing characteristic of CBD makes it a powerful tool for immune system modulation, either influencing it in a stimulatory or if necessary an inhibitory manner. The following quote from a recent study illustrates this point and additionally reveals its potential for use as a powerful tool in the fight against this novel –V.

“Modulation of ACE2 levels in these gateway tissues may prove a plausible strategy for decreasing disease susceptibility. Cannabis sativa, especially one high in the anti-inflammatory cannabinoid cannabidiol (CBD), has been proposed to modulate gene expression and inflammation and harbour anti-cancer and anti-inflammatory properties. Working under the Health Canada research license, we have developed over 800 new Cannabis sativa lines and extracts and hypothesized that high-CBD C. sativa extracts may be used to modulate ACE2 expression in COVID-19 target tissues.”

The following tables demonstrate the ability of CBD to work bi-directionally, table 1 demonstrates in some cases immunosuppressant effects are achieved whilst in other tests an immunostimulatory effect was observed. Table 2 study of mice influenza, demonstrates that CBD stimulated the immune system. Additionally in many of the diseases involving the pulmonary system, CBD improved lung function whilst reducing cytokines, inflammation and Leukocytes, whilst THC aided in viral replication and even increased air resistance.

Therefore THC should be avoided during a viral infection as it produces immunosuppressive effects which promote viral replication and can cause additional stress on the already compromised pulmonary system. CBD howeverer exhibited interesting results and warrants further scientific investigation into how it can be used to strengthen our bodies’ defences and assist us in mitigating the effects of viruses once we have been infiltrated by them. Modulation of the immune system using CBD ISOLATE may just be the ACE in the hole we need at a time like this. When a virus invades a strong immune response is most favourable, however if the viral load becomes too great before the immune system has eliminated the threat and a Cytokine storm results, the immunosuppressive effects of CBD may prove particularly useful.